The company, which offers players true ownership of in-game items, is disrupting the gaming industry

SYDNEY–(BUSINESS WIRE)–Immutable, a company that builds video games with player-owned assets, closed off the “Genesis Sale” today for their game Gods Unchained, the highest-grossing and most popular blockchain game since its announcement in July of last year. The sale ended by selling out of all remaining card packs, hitting the set goal of 33,333 ETH in sales worth approximately $6.2 million USD at the time of writing. 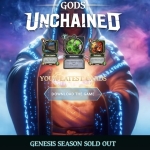 “We’re leveling up the outdated practices of the gaming industry,” said CEO James Ferguson. “Players hold immutable rights for the items they purchase or can earn in Gods Unchained, and thankfully the community that has cropped up and this accomplishment in itself proves people are excited.”

In an announcement declaring the end of the sale, the developers also shared details about their new marketplace, set to launch in the next few days. Given the open nature of the assets, however, players will also have the opportunity to trade their in-game cards and items on a variety of 3rd party and community websites, none of which require Immutable’s permission to operate.

Immutable, formerly known as Fuel Games, recently received $15 million in a Series A investment round led by Naspers Ventures, part of Naspers, a global internet group and one of the largest technology investors in the world, and Galaxy Digital EOS VC Fund, a $325 million ecosystem development fund run by blockchain-focused merchant bank Galaxy Digital. In just the beta alone, Gods Unchained has sold over 6 million cards, generating over US$5 Million in revenue, including a one-of-a-kind card sold at an auction in 2018 for US$62,000, making it the 2nd most valuable TCG card in the world. The first season of Gods Unchained includes a ‘Gods Unchained World Tournament’ with a current prize pool of over US$550,000. The game recently made global news offering to pay the lost tournament earnings to professional esports player, Blitzchung, after he was banned from competitive play and had his tournament earnings stripped by Blizzard for saying “Free Hong Kong. Revolution of our time” during a post-game interview.